The popularity of yogurt has soared over the last ten years, spurred not only by an increased understanding of yogurt’s many health benefits, but by the amazing growth in demand for Greek yogurt.

And when foods become wildly popular, there’s one thing that’s virtually certain to follow: an avalanche of machines that let you make those foods at home. It’s more than ice cream and pasta makers that have become must-have kitchen appliances; it’s not surprising to see artisanal bread makers, espresso machines, juicers, smoothie makers and panini presses in today’s kitchens.

A great yogurt machine may be one of the smartest appliance purchases you can make. Creating your own healthy snack is fun and more rewarding than just grabbing some Yoplait or Oikos at the supermarket, and you get complete control over the flavors and ingredients you want to use. But homemade yogurt made with fresh ingredients is also much better for you. It’s usually creamier, with more protein, less sugar, and no GMOs, artificial flavors, colors or sweeteners.

That makes yogurt right out of the machine a better choice for weight control, digestion, skin, hair, nails – and overall health.

The Groom+Style review team has ranked the top 5 best yogurt makers currently on the market, and we’ll unveil the list after our brief yogurt machine buying guide. One clarification before we begin: for the purposes of this article, we only considered models that make fresh yogurt. Frozen yogurt machines are another topic for another – preferably hot – day.

The closest kitchen appliance comparison for a yogurt maker is a slow cooker. You’re not going to get fresh, creamy yogurt from a machine in an hour or on a whim; making a large batch can take half-a-day or longer, because the unit is designed to keep the ingredients (primarily milk and the “starter” mixture containing the all-important bacteria) at a constant temperature as it ferments.

The initial processing can take 7-10 hours depending on the type of milk you use (skim milk takes the longest to ferment) and the type of yogurt you want. The time period will also depend on the temperature at which you ferment the yogurt. The finished product will then have to be refrigerated for at least a few hours, although most people choose to put the container in their refrigerator overnight.

In other words, don’t expect to satisfy a sudden craving for yogurt by pulling out the machine and turning it on while you watch TV for an hour. The wait, however, is worth it.

The biggest difference between yogurt machines is their size. Most are designed to create a single batch of yogurt at one time, with average capacities of 1-2 quarts. That’s an important consideration when comparing models, because fresh yogurt doesn’t have preservatives and won’t have the shelf life of store-bought yogurt. If you won’t be eating much yogurt (or don’t have a large family), you won’t want an enormous yogurt maker that will make way too much for you to eat before it spoils. On the other hand, the fact that it takes quite a while to make a batch means that a small machine won’t fit the bill for that large family.

There are also yogurt makers designed for flexibility. These machines let you put small batches of ingredients into individual jars, which go under a dome for heating and fermentation; in this way you can prepare smaller serving of different flavors all at one time, making the most of the long yogurt-making process. You can even find a few models which let you make yogurt in bulk and smaller servings at the same time.

Fully Automated or Not!

Another way to distinguish types of yogurt makers is whether they are “set it and forget it” machines or if they require/allow you to participate in the process once you hit the start button. The most useful controls lets experts set the temperature, length of time or power at which they want their yogurt to be made.

Finally, there are yogurt makers which are designed to make Greek yogurt, others which let you easily make either traditional or Greek varieties and even those which can double as pressure cookers or slow cookers. The latter might be a good choice for those with limited counter space.

What Else To Look For In a Yogurt Maker

Three terrific features in the best yogurt makers are self-cooling, timer, and auto-shutoff functions. Machines that feature self-cooling ensure that the yogurt can sit for a while without spoiling until you’re able to put it into the refrigerator, timers let you set a starting time for your batch and keep track of when your yogurt is ready for refrigeration, and the benefits of auto-shutoff should be obvious.

Other convenience factors to look for are whether the machine’s yogurt-making container can be placed right into the fridge, and how easy it is to clean – some can make clean-up a chore. 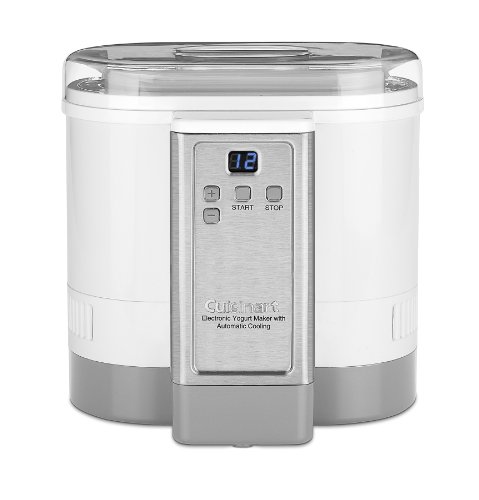 The review team loves the idea of a self-cooling yogurt maker, because there’s no sense spending hours creating yogurt only to have it go bad sitting in the machine while you’re get stuck in a traffic jam. Self-cooling is just one of the features that makes the CYM-100 #1 in the Groom+Style’s rankings; it also lets you set the fermenting time that your recipe specifies (or set a longer than usual fermenting time for tangier yogurt), and it’s simple to operate.

This Cuisinart is on the pricier end of the price spectrum for yogurt makers, but it’s pretty big, it’s quite beautiful and it works exceptionally well. You can make 1½ quarts of yogurt (more than six servings) in one batch and once you add your ingredients and touch the start button, the machine does the rest – making perfect yogurt and then keeping it cool until you shut the unit down. The LED countdown clock lets you keep track of how long the cycle has left to go. The machine is easy to clean, too.

The only downsides we’ve found to the CYM-100 are that you can’t control the internal temperature, and that it doesn’t make Greek yogurt on its own. You’ll have to manually heat the milk and strain the yogurt after it’s done, in order to come close to trademark Greek taste and consistency. You’re better off buying a machine that “specializes” in Greek yogurt. 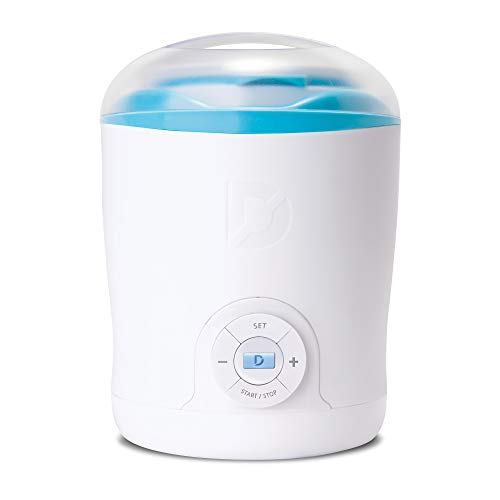 Yes, you can also make “regular” yogurt with the Dash, but its design is specifically intended to facilitate the production of perfect Greek yogurt, and that’s what it does. We say “facilitate” because you’re not going to put in ingredients, push a button, and end up with the thick, tangy product you get at the store. You’ll have to heat up the milk first, and after the yogurt is “done” and chilled you’ll have to strain out the yogurt’s whey with the included and terrific fine mesh strainer, which attaches directly to the Dash’s containers. There’s one word that sums up the Greek result: YUM.

This unit takes up less counter space and is much less expensive than the Cuisinart, since it’s completely made of plastic and doesn’t have the refrigeration unit that keeps the yogurt cold after the process is done. Those could either be drawbacks or positives, depending on what you’re looking for. The one thing that’s important to realize when comparing yogurt makers, though, is that while the machine’s containers (it comes with two, convenient for starting a second batch while the first is in the fridge) hold a little more than 1½ quarts, you won’t get that much Greek yogurt. Straining out the whey removes quite a bit of the finished product; expect to get about one quart of Greek yogurt at most.

The Dash has an adjustable timer and LCD display, a really comprehensive instruction booklet with recipes, and is available in white, pink or blue to match your kitchen’s color scheme. 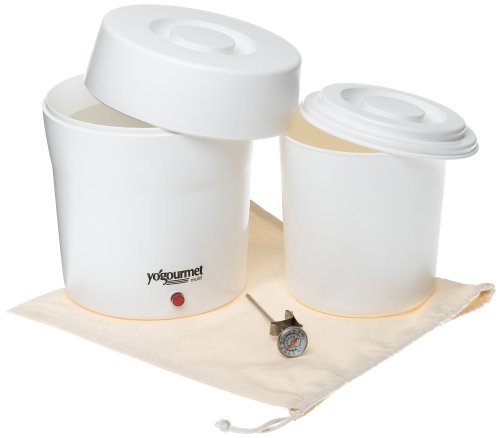 The Yogourmet falls right in middle of the price range for quality yogurt makers, and it has a unique approach to maintaining the proper temperature during the fermentation process. Rather than depending on an internal heating element and a thermostat, the unit uses a “water bath” system that ensures a uniform temperature all around the container where the work is being done. It works quite well, and if you prefer yogurt dispensed into glass instead of the included plastic container, the machine will accommodate a glass jar inside the container.

The technological approach has one additional advantage: speed. You can produce as much as two quarts in as few as four hours, about half the time required by most competitors. There’s no on-board timer, but you can run the machine through several cycles, if you want a stronger and tangier flavor. Yogourmet also sells its own freeze-dried yogurt starter product, which you may find more convenient or tasty than using store-bought yogurt as a starter. A cotton bag is included with the yogurt maker as well, if you want to try making cheese with this model. 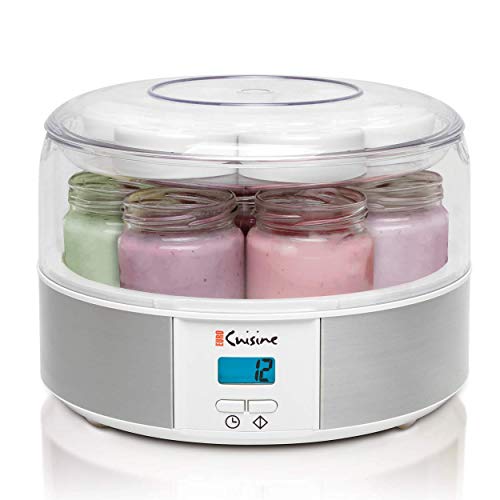 We mentioned earlier that some models allow you to make a number of smaller servings of yogurt simultaneously, producing different flavors, styles or recipes all at the same time. This is the best of the bunch; the one-touch YMX650 holds seven (included) six-ounce glass jars all under a single plastic dome.

There’s a 15-hour timer with an LED display on this Euro Cuisine unit as well as an automatic shut-off function, and it beeps to alert you when your yogurt is ready for the fridge. For those who pick “one of each” when shopping for yogurt at the store, the YMX650 is the best way to be able to choose from the same wide variety of homemade yogurt flavors or styles at home. And the final product(s)? The review team was definitely satisfied.

This model is reasonably-priced. But if you prefer a yogurt maker that’s about half the price but still accommodates six different containers at once, and don’t need a timer or the other extra functions, the bare-bones Euro Cuisine YM80 is worth your consideration.

We also mentioned earlier that some yogurt makers can do more than just make yogurt, and here’s the one that Groom+Style likes best. Ready for the Instant Pot’s resume? It’s a pressure cooker, slow cooker, yogurt maker, rice cooker, steamer, sauté pot and warmer. Needless to say, there’s a huge touchpad for programming all of those functions, and we didn’t get to try all of them. But those who have, rave about this model.

To make yogurt you just heat the milk inside the pot, add your starter and set the fermenting time, just as you would with any other unit – and you’ll get delicious results. But for anyone who’s space-challenged in their kitchen, it’s a great way to be able to create homemade yogurt without having to buy a dedicated machine, even though the device is on the expensive side.

The Groom+Style team hope that you enjoyed this review!  If you are reading this page you are most likely very interested in your families health – if so then you might be wondering if an air fryer is a good investment.  Click this link to find out how you can enjoy that deep fried taste without the extra oil.