Skip to content
Groom+Style is reader-supported. When you buy through links on our site, we may earn an affiliate commission. Learn more
Last modified on August 31, 2022

When someone insists they never once wished they could play the acoustic guitar, they’re not telling the truth.

Sure, they may not have taken the time to actually learn how to play. They may never even have picked up a guitar and tried strumming it. But who’s never pictured themselves as the center of attention at a party – or an intimate party of two – being the cool guy or girl who could casually pick up a guitar and toss off a few bars of (depending on their age) “Michelle,” “Stairway to Heaven,” “Layla,” “Wonderwalls” or “I Will Follow You Into The Dark?”

It’s never too late and it’s really not that hard. All that’s required is a little determination – and naturally, an acoustic guitar, which won’t cost anywhere near as much as a good electric guitar and amp. And for those who’ve played in the past, there’s no better time than the present to pick it up again. It’s not just a great way to impress friends and family, but numerous research studies prove that playing the guitar is relaxing and therapeutic. Oh yeah, it’s fun, too.

There are plenty of cheap starter guitars you can pick up for $30 or $40, but they’ll sound terrible and are really only suitable for the kids. In fact, they’re not even that great for kids who might take to the instrument, because they break easily and are harder to play.

The members of the Groom+Style review team have channeled their “inner cool kid” for this article, checking out the top 5 best acoustic guitars for those who aren’t going to walk into a guitar store and lay down thousands of dollars for a high-end Gibson or Taylor. We’ll get to our rankings after a quick look at what you need to know before shopping. 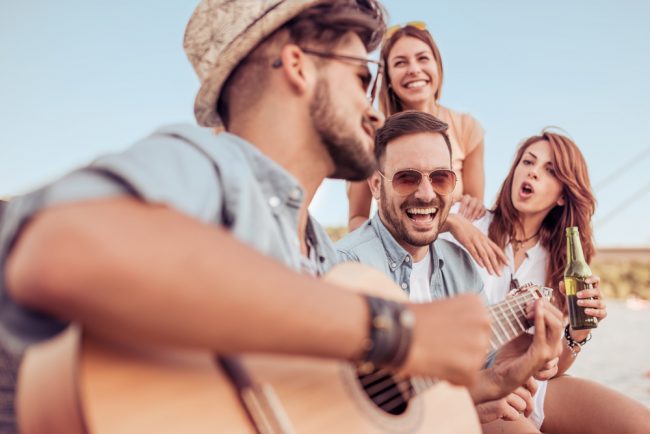 When you sit down with a guitar, whether you’re practicing or playing, you’re going to want to be comfortable. The body shouldn’t be too small or too large to sit properly between your arm and chest, and your “chord hand” should wrap comfortably around the neck of the instrument.

That’s one of two reasons why the body style of an acoustic guitar should be your first consideration; the other is that the shape of a guitar will largely determine the sound it produces. Here are the common choices:

1)  Dreadnought: The most common shape of acoustic guitars, dreadnoughts are fairly large and wide, and their big soundboards produce a full, loud sound that works for both strumming and fingerpicking. Most have 14 frets (the layers where you place your fingers to produce notes and chords).

2)  Classical: Smaller than dreadnought guitars, classical guitars sound softer and mellower and are often the first choice for students as well as accomplished classical guitarists. They normally have 19 frets.

3)  Parlor: These are the guitars you probably think of when you picture grabbing a guitar to play informally. They produce the least volume and are the smallest acoustics (other than ¾ size and mini-guitars for kids), and the close spacing of frets make them a good choice for smaller hands. They’re ideal for travel as well.

4)  Other options: The purposes of concert, grand concert, auditorium and grand auditorium guitars are obvious. They vary in size and volume depending on where they are to be used; you may be most familiar with the auditorium acoustic guitar from the Clapton unplugged version of “Layla.” Jumbo guitars are somewhat similar, large, bassy and popular for country players.

The diameter of an acoustic guitar’s neck won’t have a major impact on its sound, but will be a huge factor in how comfortable the instrument is to play. The normal choices are 12-fret and 14-fret necks, specifying whether there are either 12 or 14 frets located above the body of the guitar. Smaller is better if you have small hands, so you don’t have to reach all the way down to the guitar body to hit all of the required chords.

Beginners will usually begin on an acoustic with nylon strings because they’re softer on the hands. That’s not always the proper choice, though. The sound produced by nylon strings is softer and more nuanced while steel strings are louder and more impactful, and not that hard to get used to. Most musicians who don’t stick to classical or folk music prefer steel, and the majority of acoustics (except for classical guitars) are built to accommodate steel strings. Acoustic guitars normally have six strings. 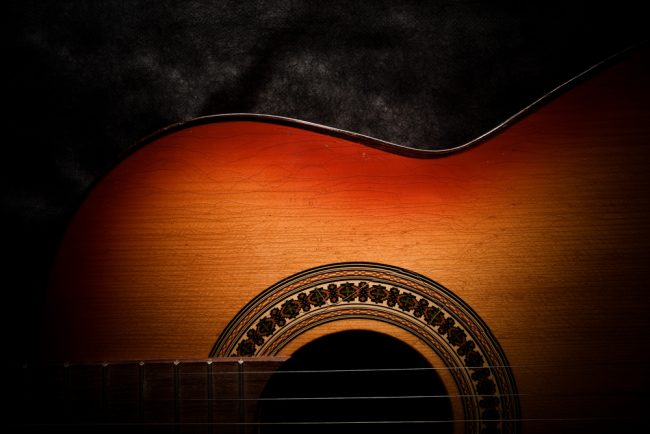 Acoustic guitars are available with a huge number of “tonewoods” used to build the various parts of the instrument. They obviously determine the overall look of the guitar, but the tonewoods play a major role in the sound it produces, with the wood used for the top of the instrument the most important. They’re also a huge factor in the guitar’s cost.

For example, commonly-used spruce and mahogany tops create clear and powerful sound respectively, while more-expensive rosewood tops deliver a rich tone that can cut through clutter extremely well. Woods like maple are often used on the backs and sides of guitars because they don’t interfere with the instruments’ natural sound, while ebony is sometimes utilized for frets. A good balance between the woods is crucial. Very expensive woods like koa are prized for use on high-end acoustics.

Other Factors to Consider When Choosing a Guitar

Some players prefer acousto-electric hybrids, which have pickups and preamps (and sometimes other electronics) built in; we haven’t included those in the Groom+Style rankings. You may also want to consider whether a guitar has an open or closed tuning mechanism, as open models are easier to work with but closed ones protect the heads from corrosion.

We’re all tuned up. Time to play.

If you’ve seen anyone playing an acoustic guitar over the last fifty years, there’s an excellent chance they were playing a Yamaha FG830. It’s not only one of the oldest lines ever produced, it was the best-selling acoustic in the world for many years.

The latest version of the FG830 (available as either a dreadnought or concert, at the same price) is as great as its predecessors. It’s extremely comfortable with a classic shape that isn’t too unwieldy in any area, and even though it’s a production model made in China there are none of the sharp edges or uneven frets you often see on moderately-priced guitars.

There’s a solid Sitka Spruce top with Rosewood bridge, fingerboard, back and sides plus steel strings, giving the FG830 a terrific sound and an expensive look (the abalone inlay around the sound hole helps with the look, too).

One reason for the balanced and surprisingly punchy sound of this Yamaha is its new scalloped bracing pattern, which does a great job bringing out and intensifying the natural tone of the instrument without camouflaging its more subtle overtones. There are diecast tuners, eleven colors to choose from, and an accessory stand you can add for an extra price.

You’re playing your new acoustic guitar and someone asks “What kind of guitar is that?” Imagine how awesome would it be to say matter-of-factly: “Oh, it’s a Fender.”

That’s not a dream; even though the company makes some of the most revered electric guitars, basses and acoustic instruments, Fender also makes a tremendous acoustic line for beginners at ridiculously low prices.They’re able to keep costs low by using less-expensive Basswood for the guitar’s top and Agathis wood on the neck, sides and back, along with coated 80/20 bronze strings and lower-end hardware like a synthetic saddle.

As a result, the FA-100’s sound won’t be outstanding. It will be more than adequate, though, for a beginner or a relatively-new player who’s practicing at home, with good volume for a dreadnought acoustic and sound that’s true enough at both ends to satisfy uncritical ears. It comes with a gig bag, too.

This is a terrific acoustic guitar. You’ll pay about one-third more for it than the Yamaha the Groom+Style review team ranked at the top of this list, but it’s worth it. We only put it at #3 because it’s more expensive. The S6 is a dreadnought that feels, looks and sounds like a premium instrument thanks to its smart design and quality woods.

The top is made from solid cedar that’s been pressure-tested, the sides and back are wild cherry, the thicker-than-normal neck is Silverleaf maple and the bridge and fretboard are Rosewood. The combination means an acoustic instrument that’s beautiful to look at and produces a clean sound with the smoothness and warmth you’d want from a performance model.

The cedar top will make the Seagull S6 sound a bit more complex than most beginners’ guitars, but it’s more sophisticated and pleasing to the ear. The hardware is top-notch, and even small details like the saddle grooves are perfectly designed.

The review team wanted to include one outstanding-yet-affordable classical instrument on this list of the top 5 best acoustic guitars, and here it is. The J. Navarro is in the same price range as the Seagull but its warm, classic tone makes it stand out with sound that’s quite different than an “ordinary” dreadnought. It’s also louder than you’d think it would be.

The woods are great: a solid cedar top, Rosewood for the sides, back and fretboard, and mahogany for the neck (which has a traditional Spanish heel). The NC-61 doesn’t just sound like a classical acoustic guitar; with a hard gloss finish, it looks the part.

Hardware hasn’t been ignored in the construction of this guitar, either. The real bone nut and saddle and gold-plated 12:1 tuning machine are much more than you’ll find on most competitively-priced acoustics.

The least-expensive choice on the Groom+Style team’s list is a perfect choice if you’re not sure that you (or your child) are going to stick with the guitar over the long term. It’s not fragile or difficult to play, and it sounds quite nice for a reasonably priced acoustic instrument.

The Jasmine S35 is a dreadnought with a laminate spruce top and lower-end nato neck, back, and sides, along with a Rosewood fretboard and bronze strings.

The sound it produces isn’t going to wow anyone but it’s quite pleasant and balanced, and this guitar can actually sound rather impressive if you set it up properly, replace some of the cheaper hardware and restring it.

Groom+Style hope you enjoyed this review – if you are still searching for your next hobby or a stylish present for someone then you could always consider slacklining or longboarding. These sports are sure to get the endorphins flowing.