Skip to content
Groom+Style is reader-supported. When you buy through links on our site, we may earn an affiliate commission. Learn more
Home » Best Backpacking Tent – Top 5 Lightest Reviewed and Tested

What do you need in a backpacking tent? The first, second and third qualities on most peoples’ lists would all be the same: it has to be lightweight.

That’s always tricky to balance when you’re also considering price and quality, of course, but there’s no sense even considering putting a tent in your backpack which will be holding you back every step of the way.

After that, there are lots of other important details to juggle, including roominess, durability, waterproofing, size – and naturally, price. We’ve done the comparisons for you in compiling our list of the top 5 best backpacking tents, and have included choices for both freestanding and non-freestanding models. We’ve stuck to one- or two-person tents, since just about all of the high-quality three-person models aren’t really light enough to consider them “backpacking tents”. 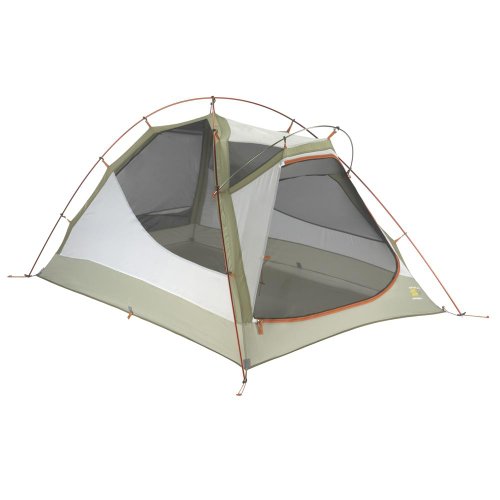 This freestanding backpacking tent isn’t the lightest on our list, weighing a little over five pounds, but it combines more-than-acceptable weight with terrific construction and durability.

The LightWedge 2 is most notable, though, for a phenomenal feature represented by the “DP” in its name: dry pitch. What it means is that when you’re stopping in a heavy rain, you can quickly set up the rainfly and then duck underneath to set up the rest of the tent. Of course, it also means you can simply use the rainfly as a tarp to sleep under if the weather is beautiful.

Whether or not you erect the rainfly first, this Mountain Hardwear backpacking tent is easy to set up, thanks to the DAC Pressfit pole which goes directly into the tent’s cornerpieces; you can even leave the corners connected to the pole and tent when you stow the tent to resume your hike, and have an even faster setup the next time you stop.

The build of the LightWedge 2 is outstanding. The fly and perimeter seams are taped, the corners and guy clip anchors are welded, and rain simply doesn’t come in. The company says the tent has been tested in its rain room to withstand more than a thousand inches of rain in 24 hours. We have no way of replicating that sort of test, but we believe it. It stands up well to heavy wind, too. This is one tough tent.

The Mountain Hardwear tent will be a snug fit at bedtime for two large adults, at 84 by 56 inches, but there’s more than enough room to get the job done. It also has a height of 45 inches, with a hub-geometry shape conducive to sitting. Its packed size of 6 by 22 inches makes it pretty easy to stow, too.

There’s an included footprint, an entry vestibule where you can keep your gear, a large mesh door, a good-sized tension shelf for storage and even reflectors on the zipper pulls, starter points and guy loops so you can find what you’re looking for at night while setting up. As for negatives, there aren’t many; there are only two small windows and we wish it was a bit lighter, but you can’t have everything. What you have with the LightWedge 2 is a terrific two-person backpacking tent at an affordable price.

You want something lighter? Look no further than the Big Agnes Seedhouse SL2, which weighs in at under three pounds, including fly and footprint (the latter must be purchased separately). It’s a notch smaller than the LightWedge 2 at its widest point, measuring 84 by 52 inches, but does taper down to 42 inches wide at the far end. Two normal-sized adults will have no issues sleeping (and it would be positively roomy for one), and the 43-inch height is acceptable for hanging out.

There’s no vestibule for gear storage, but the rainfly does create a large (eight square feet) area that can be used as one. You can also purchase a Big Agnes Triangle gear loft or entertainment center, which are compatible with this tent and will provide plenty of extra storage aside from the three small mesh pockets built in.

Big Agnes produces quality tents and no one could be disappointed with the double-walled Seedhouse SL2. The fly and floor are made from silicone-treated nylon ripstop, and there is an all-mesh canopy which provides great ventilation and great views.

This is a freestanding model (which also comes with reflective guy lines for extra support in windy conditions) with DAC Featherlite poles and press-fit connectors, so it’s sturdy yet easy to set up and break down in five minutes or so, thanks to the self-assembling hub pole. There’s a single D-shaped door.

Rain and wind aren’t a problem as long as you set up the fly (which should be obvious, given our description of the mesh canopy); this is a sturdy little tent built to last. If you don’t need “all that room,” the SL1 one-person from Big Agnes has almost all of the same features, measures 90 by 43 inches and weighs a little over two pounds. 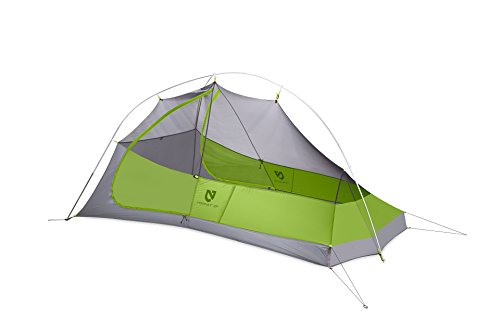 One of the things we hate about two-person tents is that they’re usually difficult to get in and out of without disturbing the other occupant. Meet the Nemo Hornet, which has two side doors instead of one door at the head of the tent, with guyouts that essentially create two separate vestibules on either side. The Hornet is essentially a smaller version of Nemo’s larger and heavier Blaze tents, with somewhat less space and definitely less weight.

This backpacking tent weighs in around 2½ pounds without the optional footprint, and provides enough room for two campers with an 85 by 51 floor, tapered down at the far end. There’s a little less headroom than in the two previously-listed tents though, about 40 inches, and there’s no brow pole so the sides walls tend to curve inward. Those two factors combine to make this Nemo model feel somewhat more crowded inside than it really is.

There is one concession you may have to make in return for the Hornet’s light weight. The rainfly is constructed from unusually lightweight 7D nylon ripstop, as compared to the 15D to 20D normally used for these types of tents – and that means less insulation against cold weather. The canopy and floor are made of 20D nylon ripstop, and the frame has DAC Featherlite construction.

Assembling this Nemo two-person tent takes a little while to get used to but after a few days you’ll only need 5-10 minutes to set it up and take it down, and the rainfly clips on easily. This is a non-freestanding tent and the stakes are, as is often the case, rather flimsy so you’ll want to get some sturdier ones.

There is a price for light weight and convenience. We’re not quite sure this model is worth more than the first two best backpacking tents we’ve listed, which is why it comes in at #3. It is nice to have two doors, though. As with the Big Agnes, there’s a one-person version of this tent which is slightly lighter (by five ounces) and cheaper. We think the the bigger model is worth choosing. 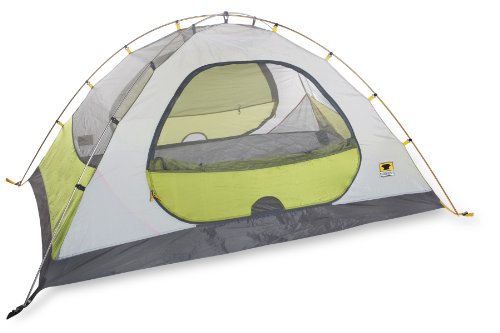 This is our budget choice for best backpacking tent. It’s almost five pounds so it’s not extremely lightweight, but it’s pretty roomy (92 by 56 inches, 43 inches high) and it’s priced much lower than all of our other choices.

The tent, fly and bathtub floor are all made from 185T polyester with polyurethane coating and there’s mesh on all four sides for good ventilation. Surprisingly, there are two doors on the Morrison, along with two decent-sized vestibules. The seams are taped and the fly covers well, so it stands up to normal rainy and windy conditions, and well-placed vents minimize condensation.

Once you’ve done it once or twice, this Mountainsmith can be set up and broken down in 5-10 minutes thanks to the two crossing pole construction and color-coded attachments. The packed size as provided is about 18 by 7½ inches, but since the floor is rather thin you should add a ground cover or footprint to be on the safe side.

It’s unusual to find all of the features that the Morrison offers at this price range, so this model is a bargain. At times you can find it for even less. 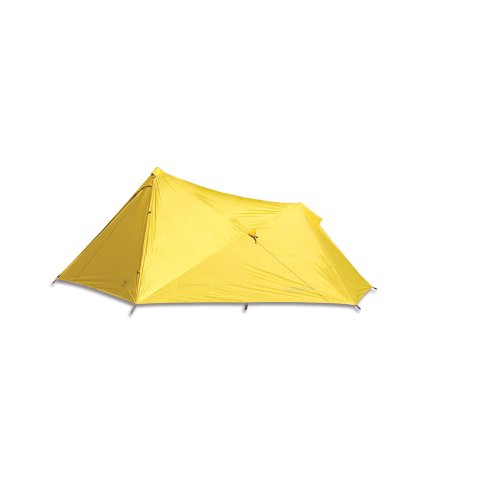 For serious backpackers who want to travel solo and light, you can’t do better than the one-person Tarptent Notch. This isn’t a tent for people who take an occasional overnight hike, because you need trekking poles for its setup. (You can purchase alternate poles if you prefer.) However, thru-hikers who understand the real value of an ultra-lightweight shelter will quickly fall in love. (How light? One pound, eleven ounces light. And packed, it measures 16 inches by four inches.)

The flexibility and convenience of the Tarptent stand out. It has an inner nest that can be removed, allowing you to pitch the Notch as either as a double-walled tent or a standalone tarp – and making the unit even lighter if you only want to carry the tarp along with you. When set up, this tent is 84 inches long and 32 inches wide with a 43 inch interior height, a generous amount of space for a tent intended for a solo hiker – made even roomier by the dual apex design with two peaks and no center pole, and by the sewn-in plastic struts which can be used to adjust the height of the fly for maximum headroom. There are dual entries, lots of vestibule space, and lots of ventilation. It does not come with a footprint, though.

The Tarptent is made of 30D silicone-treated ripstop nylon (including the bathtub floor) and will stand up to wear and the elements; the line-locs alongside the apex points allow you to easily adjust the fly to handle the wind. The one negative is that it does not come seam-sealed, so you either have to do it yourself or pay the company to do it for you. Setup and takedown shouldn’t take you more than ten minutes complete, once you get used to the procedure.

We decided to list the Tarptent at #5 on this list because it’s certainly not for everyone, and it’s not cheap either. If it meets your needs, though, it’s a terrific tent.